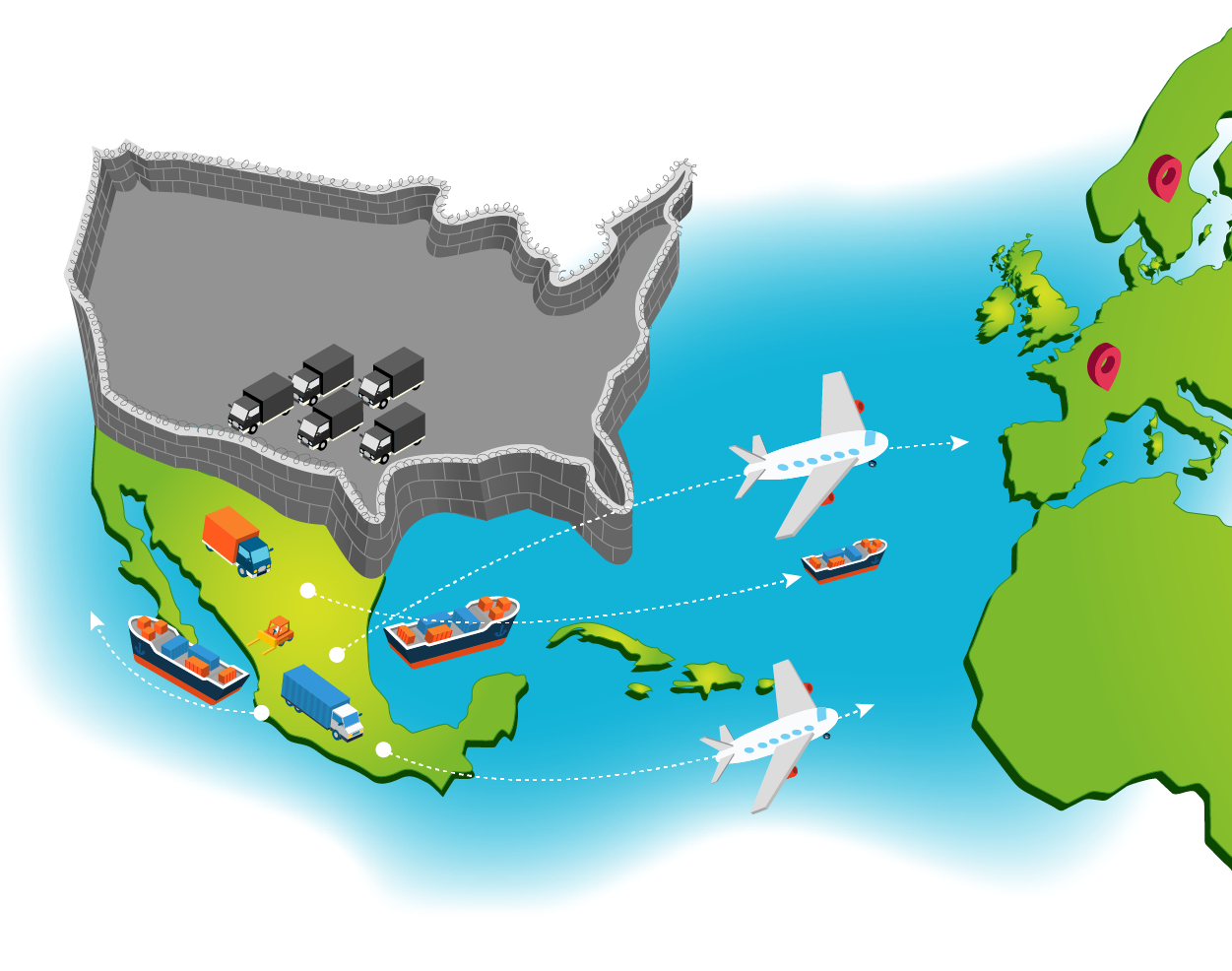 Reason #1 – Mexico is a free and open economy which makes the Peso a freely floating currency.

When news breaks of potential changes that could affect the Mexican economy, such as new tariffs, the Mexican free market is able to step in and make adjustments to the value of the Peso to offset any possible damage that may occur from these changes. The Mexican economy will always be able to respond to any import duties imposed by the Trump administration. The devaluing Peso is one of Mexico’s greatest advantages.

After the election of President Trump in 2016, the Peso devalued about 20% and has been consistently devaluing. This has helped Mexico stay competitive as a production hub for North America, attracting manufacturers from across the globe. The Peso’s steady, sustained decline has been a reliable attribute for international manufacturers. At the same time Mexico continues to expand free trade deals with powerhouse partners like China and the E.U.

This past May, the Peso furtherly devalued due to the new tariffs placed on steel and aluminum by the Trump administration. If NAFTA is adjusted and import duties rise, Mexico will be able to respond similarly in the future with another currency devaluation, offsetting the effects of any NAFTA changes.

Since Mexico’s Peso is on the decline, this makes Reason #2 an even more attractive incentive.

Reason #2 – There is a larger and more experienced supply of engineering and technical labor (indirects) within the manufacturing sector in Mexico than in the U.S.

Mexico has a strong manufacturing culture that goes back many generations and has contributed to the importance of manufacturing to Mexico’s economy. Many young people in Mexico are choosing to study engineering, knowing they will have job security in the manufacturing sector. For example, in 2012, there were about 101,700 students graduating from Mexican universities with an engineering degree, while in 2018 in the United there were only 98,000 students graduating with engineering degrees. In the United States, by contrast, engineering graduates prefer careers in robotics or mobile application development, for example, rather than in traditional manufacturing. This has resulted in a shortage of skilled engineers and technicians within the manufacturing field in the U.S.

The U.S.’s shortage of skilled labor is not the only thing hurting them, Reason #3 is huge concern as well.

Reason #3 –Today, the manufacturing sector in the U.S. is fundamentally unstable.

Between the uncertainty with NAFTA and the Trump administration starting trade wars with the E.U. and Canada, there is unsteadiness in the manufacturing sector. American manufacturers big and small are worried about the future of their business.

Mexico, on the other hand, has a stable democracy, boasts free trade agreements with 46 countries and ranks ninth globally among the most attractive destinations for foreign direct investment. Also, instead of waiting to see what comes next from the Trump administration, Mexico is forging ahead with its own new trade agreements. The new E.U. deal will virtually eliminate tariffs for both sides. Cecilia Malmström, the EU’s trade commissioner believes their new agreement will, “send a strong message to other partners that it is possible to modernize existing trade relations when both partners share a clear belief in the merits of openness, and of free and fair trade.”

Now that these new trade agreements are nearly finalized, manufacturers in Mexico are able to focus on growing their operations and begin taking advantage of new trade opportunities with the E.U. and China.

Our fourth and final reason is by far the most important and beneficial for manufacturers in Mexico. But you’ll need to join our July 18 webinar to learn about it. The webinar will be held for (North America) 2pm ET and (Europe) 3:30pm CET.