Does Mexico offer manufacturers the best combination in the world of location, productivity and cost-effective operations?

<<Read part two of this blog post, on why Mexico is an essential part of any regional production strategy>>

As the chart below depicts, Mexico stands out for cost-competitiveness among the world’s highest-exporting manufacturing nations. 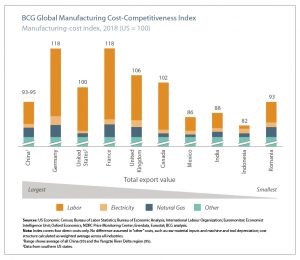 Here’s what we found most noteworthy about the strengths of Mexico manufacturing, based on BCG’s analysis in the chart above:

Check here for part two of this blog post, which delves into BCG’s analysis of Mexico’s strengths as a regional production hub for North America export.