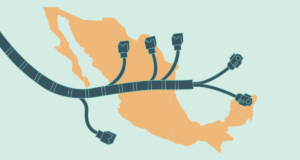 The decision for international wire harness manufacturers to expand their production footprint to a new region can be a daunting one. For years, China has been a leading destination for offshore production in general, but with increasing quality control issues, ever-rising operating costs, intellectual property concerns, and short-term economic and health issues, China is less than ideal. We believe Mexico, specifically the near-border state of Zacatecas, is a far better option for international wire harness manufacturers. Here are some of the major reasons why.

Zacatecas, the location of Entrada’s original manufacturing campus, has been a hub for wire harness assembly since the 1990s. More than 7,000 people work for numerous companies from a wide range of industries in the state of Zacatecas building wire harnesses. With a three-decade legacy as a foundation, wire harness production in Zacatecas has grown significantly. Thanks to large employers such as Aptiv (formerly Delphi), ACI, Electrex, Kauffman, and others continued growth is expected. When international wire harness manufacturers come to Zacatecas, they have access to a large pool of talented, young and highly trained workers. This comes from the area’s long history of wire harness assembly. It is also the result of the skills that are being taught in Mexico’s technical institutions and universities.

The Zacatecas workforce emphasizes stability. Compared to on-border Mexican states (think Baja, Sonora, Chihuahua, Coahuila, Nuevo Leon and Tamaulipas), where the workforce is more transient Zacatecas remains consistent. Further, due to the long-standing heritage of wire harness production in Zacatecas, the supply base is well developed. Another major reason Zacatecas is a great location for international wire harness manufacturers is due to its abundance of skilled direct labor and its high labor retention rate.

Our client Telamon, for example, experienced explosive growth. When the U.S.-based company established operations in Mexico in 2007, it only had 30 employees. Within seven years Telamon increased its headcount steadily to 600 workers. Then from 2014 to 2018, Telamon doubled its headcount. Mexico’s auto sector has since experienced runaway expansion.

This rapid growth in Mexico’s automotive industry meant there was a greater need for production of machinery, parts and electrical equipment such as wire harnesses. Such fast growth also led to some challenges as well. Higher-than-usual turnover was a factor, which the company faced and overcame, with Entrada Group’s guidance.

Industry groups like Acumen Research predict that by 2026 the global automotive wire harness market will be worth $78.3 billion. This development is being driven by sales growth of electric vehicles. Soon this product will drive even more business opportunities. The international wire harness manufacturers will certainly benefit once the tax incentives take effect.